The Corals Of Venice

The Corals of Venice

Years ago I didn’t have my own shop, but I worked in a nice store of high-quality Venetian handcrafted fabrics, produced by Tessitura Bevilacqua.

One day I was asked, for a client, to try to create some samples of corals in Venetian Murano Glass seedbeads.

But I didn’t really know how to make beaded corals at the time.

I only had a vague idea of how they were built. It was a technique known to very few people, and even today I can’t tell you exactly who invented it. Definitely a derivation of the art of beaded flowers.

The client who was interested in them was an elegant American lady, extremely lively despite her not very young age.

She was furnishing in “Venetian” style and pomp the noble floor of a palace on the Grand Canal where she intended to live, together with her husband.

The works were directed by the famous interior designer Tony Duquette, an artist known for his eclectic talent and for his successes as a set and costume designer in the world of theater and cinema.

The best materials and craftsmen were used in the decoration works, a riot of damask, silk velvet and furnishings that celebrated the splendor of Venice and its oriental spirit.

For the ballroom the theme chosen was that of coral.

Beaded corals: what a passion and what a secret

I repeat, I did not know how to make corals at the time, but my employers urged me to try with the samples for the decoration in progress, telling me that they should not have been too expensive, because they might would have ordered many pieces.

At the time I didn’t know who the clients were, but I liked the challenge.

To get inspired, I often stopped to admire the beadwork of the Noblewoman Nella Sammartini Lopez y Rojo in the shop window of the Antique Dealer Trois in San Maurizio.

Her small table coral twigs and her cleverly matched flower bouquets were my point of reference. I wanted to understand the essence of her perfection, which seemed unattainable to me. Fortunately, her niece, Giovanna Poggi Marchesi, continued her art successfully. She also publishing a beautiful book: I Fiori di Venezia – The Flowers of Venice.

The Venetian noblewoman was among the few artists to have carried on the art of beaded flowers in a time when it could have been forgotten, and I considered her an ideal teacher.

But I knew I could only rely on myself to learn new processing techniques. No one would reveal such a well-kept secret to me. So I tried and tried until I got to build my first beaded corals.

Change of scene for corals

In the end the corals for the decoration of the “Coral Ball Room” were created using much lighter wooden sticks which, painted coral red, were then used in profusion to brighten the antique chandeliers, stuccos, mirrors and tables of the formal hall.

But I continued to make beaded corals improving more and more the acquired technique.

At first I only made home decorations that were very popular as a “Wunderkammer” touch and a symbol of good luck, then I began to use corals to create applications on typical bags and slippers, the Furlane.

I did not invent the Venetian bead corals, but I was the first to further develop their use in fashion accessories and jewelry. By refining the techniques I managed to transform the process to obtain earrings, necklaces, brooches and even bridal hairstyles.

But why coral in Venice?

The answer is clear: Venice is considered as a Queen, coral is a gem that Neptune offers to her, along with the other gifts of the sea, in the famous canvas by Giambattista Tiepolo, painted in the mid-seventeenth century and kept in the Doge’s Palace.

Venetian women have always adored coral and for this reason all the wonderful shades of the stone of organic origin have been recreated with expert chemical formulas by Murano glass masters.

Now that natural coral, formed from the secretions of colonies of countless tiny polyps, is challenged by climate change, it has become an even stronger emblem of resilience and will.

It has always been considered a talisman and a symbol of life, the myth linked to Medusa and the legend of the birth of the coral from its blood is known to all.

But small sprigs of coral are depicted in many paintings worn by cupids or the baby Jesus.

Friends who love art often tell me about the corals depicted in ancient paintings like this one by Masaccio (thanks Silvia).

I am intrigued by the nature of coral, suspended between the animal, vegetable and mineral world.

It fascinates me to recreate it with ancient beads, also worked with patient industriousness.

As if I too could, from countless beads, as many as the small organisms that form its skeleton in nature, give life to something that has a profound meaning in the human imagination, for centuries and centuries.

Finally, I have often found coral in literature.

In the collection of short stories “The Merchant of Corals” by Joseph Roth, among other famous writings such as “The Legend of the Holy Drinker”, there is also the fairy tale of the Coral Merchant Nissen Piczenik, entitled “The Leviathan”. The merchant’s business description is so accurate that it takes the reader into a parallel and fascinating world like a time machine. Even if the ending is rather dramatic, and full of morale.

The essence of coral carries its own philosophy. Of which I will be happy if I have brought you some fragments, or rather bead. 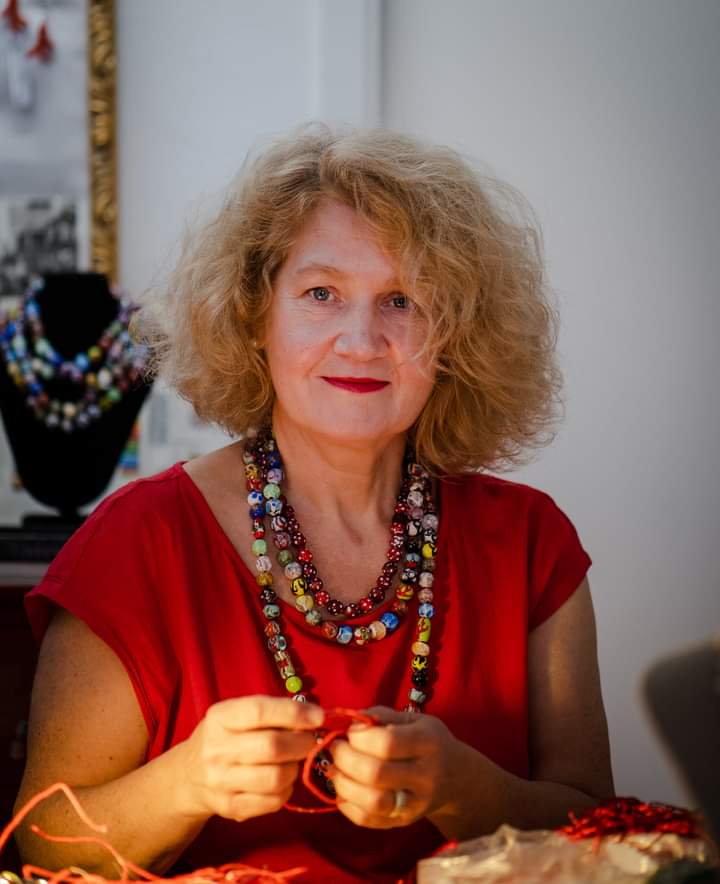 Marisa
× How can I help you?